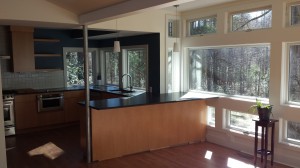 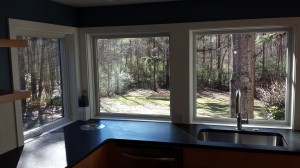 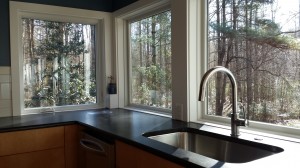 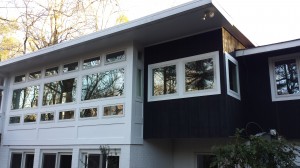 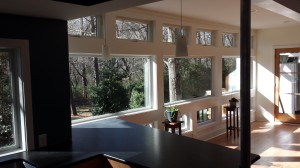 As the name implies, MCMs were typically built in the middle of the 20th century.  An accepted date range is from 1945 to 1965, although the home we recently renovated was built in 1968.

There are a number of articles, websites, and books dedicated to this style of architecture, so I won’t duplicate them here.  Generally speaking, Mid-Century Modern homes feature clean, horizontal lines, open spaces and lots of windows.  Details are simple, so don’t expect to see multi-piece crown moldings (in fact, don’t expect to see any at all).

John Marshall Custom Homes was hired to renovate and update a 1968 home on a 3 acre lot just outside the town limits of Davidson.  While the home definitely had features of a MCM, it also had features that conflicted with this design style.

Architect Dave Malushizky of The Lawrence Group in Davidson developed a design for the home which clearly puts it in the Mid-Century Modern camp.  We replaced a sun room with living space, and completely updated the kitchen, bathrooms, and finished the basement space of this home.  Windows were replaced with larger ones to maximize the view of the beautiful lot.  A bank of windows on the rear of the house is a highlight of this home.

The result is simply stunning!  In addition to the aesthetic updates, we updated the HVAC, plumbing and electrical systems while also sealing and conditioning the crawl space and adding additional insulation and LED lighting, resulting in a vastly more efficient home.

While we’re glad to live in the 21st century, it was fun to go back to the middle of the last century to explore this exciting style of home!